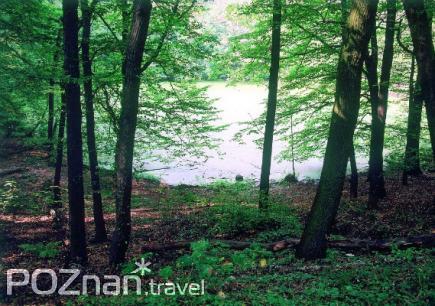 The environs of Poznań abound in areas of high natural value. However, definitely the most interesting and precious object is to be found within the city's borders! It is a group of meteorite impact craters on the slope of Mount Morasko (Góra Moraska). This hill is the highest rise in the Region of Wielkopolska (154 meters above the sea level).

The group of seven crates lies on the hill's southern slope, approximately 500 metres west of the village of Morasko. This area of 55 hectares became a nature reserve in 1976. The craters were developed as a result of an impact of a large iron meteorite's elements (siderite). The meteorite probably came from the Perseid shower that visits the Earth yearly in the middle of August. The craters in Morasko are one of the largest groups of craters on the planet, both when talking about the craters' size and number. The biggest crater's diameter is around 60 metres while its depth reaches 11.5 metres.

Apart from these "cosmic" and landscape virtues it is also a very precious natural monument. Most of the craters lie in, once typical for the Wielkopolska region but currently harder and harder to encounter, oak and hornbeam forest. In the herb layer of the undergrowth we can encounter numerous rare and protected plants, such as the Martagon Lily (Lilium martagon), the European Wild Ginger (Asarum europaeum), etc. The Soft Hornwort (Ceratophyllum submersum), very rare in the region of Wielkopolska, grows in the water reservoirs. Moreover, the reserve abounds in animal species too. Apart from an abundance of invertebrates, noteworthy are numerous birds that nest here (e.g.the Black Woodpecker - Dryocopus martius or the European Nightjar (Caprimulgus europaeus)), or among mammals the Eurasian badger.