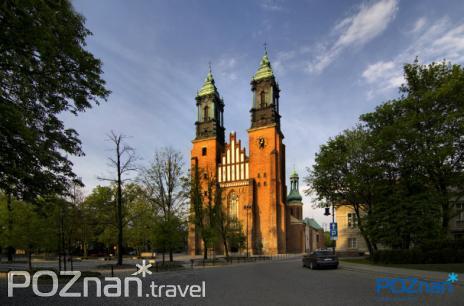 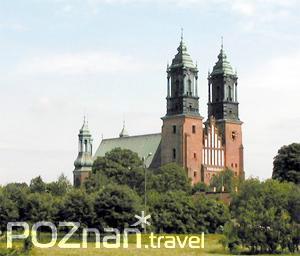 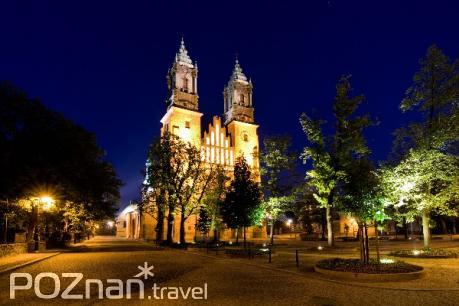 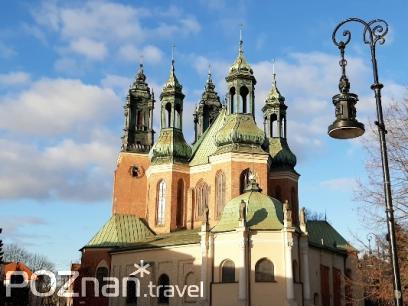 The first Polish cathedral, built in the tenth century. Inside, the tombstones from between the 15th and 16th century, the main Gothic altar from 1512 and 19th century Golden Chapel containing the sarcophagi and statues of first Polish rulers Mieszko I and Bolesław Chrobry are noteworthy. In the cellars, relics of the first cathedral, tombs of the first rulers and a Baptistery can be seen. Next to the cathedral is located the modern interactive Heritage Center of Cathedral Island Porta Posnania.

Having established the first archbishopric (968) near the ducal palatium and the chapel founded in 965 on the island of Ostrów Tumski, Mieszko I built a pre-Romanesque three-aisled basilica.

The main entrance to the cathedra is in the front façade through the Gothic portals from the 15th c. and a bronze door decorated with the scenes from the life of St. Peter and St. Paul. A high Gothic window with a rosette above the portals surmounted by crow-stepped gables and blind windows. It is a basilica with a chevet and two aisles adjoined by 12 chapels, 2 sacristies and a narthex. The presbytery and the ambulatory are covered with a groin vault, whereas the nave and the aisles are covered with a stellar vault.
Artefacts from Lower Silesia in the presbytery. A Late Gothic altarpiece in the middle - poliptych from 1512 with the sculptures of Mary with the Infant, St. Barbara and St. Catherine in the centre; outer wings with four panels featuring sculptures of 12 saintly women, painted scenes of the Passion and saints on the opposite side. Late Gothic stalls from the 16th c.
The bronze plate in the floor in front of the presbytery commemorates the first bishop Jordan and 7 rulers buried in the cathedral. The nave ends in an organ loft.

There are many valuable artworks in the aisles, along the ambulatory and in the chapels, most of which are in the Baroque style. You must see 5 Gothic and Renaissance tombstones from the 14th and 15th from the Vischer's workshop in Munich (stolen by the Germans during the war and returned by the Russians in 1990) - the most valuable piece of art in the cathedral. The chapels boast an impressive Renaissance tomb of the Górka family from 1574 (the Chapel of the Holy Sacrament), and St. Martin's Entry to Amiens, a painting by Krzysztof Boguszewski from 1628 (St. Martin's Chapel).

Two chapels are of special prominence: the Golden Chapel (the Chapel of Polish Sovereigns) and St. Stanislaus's Chapel, also called the Royal Chapel. The first is modelled on Byzantine architecture and features a tomb from 1840 with the mortal remains of Mieszko I and Bolesław the Brave (first polish rulers) and a monument to both rulers. The Royal Chapel could once boast the tomb of King Przemysł II but presently it features an impressive epitaph honouring the sovereign.

In the vaults there are remains of the Early Romanesque and Romanesque cathedrals discovered in the years 1946 and 1951-56 and the alleged graves of Mieszko I and Bolesław the Brave. Below the west part of the presbytery there is a collection of stone tombstones and epitaphs and the burial vault of local archbishops and suffragans built in 1963.