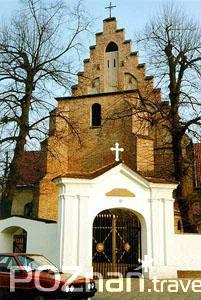 Church of St. Margaret the Virgin and the Martyr

There was a shrine in Śródka before 1231 but the present church is from the 14th c. The Chapel of St. Barbara adjoining the church is from the 14th c., vaulting is from 16th c. and the tower (main portals from the 16th c., two portal arcades from the 15th c. and the bell from 1674) was erected even later. It replaced the narthex and obscured the imposing crow-stepped gable. The Chapel of St. Philip Neri along the south wall was built in around 1625. The church burnt down during the Swedish Deluge. Rebuilt in 1658, it lost its medieval character. It was used by the Oratorians in the years 1671-1805.

The church is surrounded by a low wall with a gateway and an inscription plate from 1786. Along the northwest side of the church stands the former oratory from the years 1746-77 supplemented with a new east wing in 1900.

ADD TO TRIP
Church of St. Margaret the Virgin and the Martyr
ul. Filipińska 4
Poznań