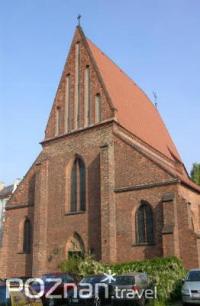 The parish was founded before 1236 but the earliest mention of a shrine (most probably a wooden one) is from 1252. The construction of a brickwork church was commenced in the 14th c. The presbytery was built already in the 14th c. but the rest of the present structure with a nave and two aisles was not completed until the mid-sixteenth century. Burnt down by the soldiers of Brandenburg in 1657, it was rebuilt at the turn of the 17th and 18th c. with Baroque interior decoration. The original tower was dismantled in 1745 and a new one was erected in the years 1935-29. The church suffered severe damage in 1945 and was rebuilt in the Late Gothic style in the years 1949-54.

The stellar vaulted nave and aisles are embellished with polychrome decoration, painted on brick by Wacław Taranczewski in 1957. The stain glass windows depicting the scenes of the Passion and the event from the life of St. Martin are the work of Jan Piasecki (1959) whereas the stain glass windows in the aisles with the images of Polish rulers, saints and blesseds were made in the workshop of Maria Powalisz Bardońska (1978-93).

A Late Gothic triptych from 1498 with the sculptures of Saint Mary with the Infant in a mandorla, St. John the Baptist and St. Catherine of Alexandria in the central panel of the main altar; bas-reliefs on the obverse of the side panels. Baroque crucifix from the 18th c. in the right aisle, three Late Baroque altars from the 18th c. in the left aisle.

Pointed arch portals in the façade, sandstone bas-relief depicting St. Martin on the tympanum, a work by Edward Haupt from 1953. Arcaded frieze design on the north wall and a plaque beneath (mounted in 1986) commemorating Rev. Piotr Wawrzyniak (d. 1910), an outstanding social activist. A grotto (chapel) of Our Lady of Lourdes from 1911 (extended in 1932) northwest of the church featuring The Vision of St. Bernadette. In the arcade nearby a plaque commemorating the 15th anniversary of the Wielkopolska uprising.

A monument to Adam Mickiewicz, a work by Władysław Oleszczyński, unveiled in 1859 (in front of a wooden bell tower east of the church) was removed in 1940. What remains is a plain pedestal from 1957 and a fragment of a baluster from the early 20th c.