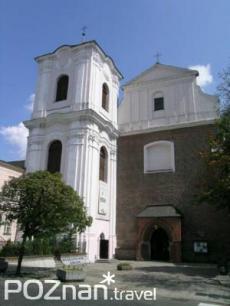 Wielkopolskan dukes Przemysł I and Bolesław the Pious founded the first Dominican church in St. Gotthard' s settlement in 1244. The church was rebuilt in the 15th c. and received the present appearance in the early 18th c. (Jan Catenazzi). It has a single nave with stellar vaulting and barrel vaulting and a barrel vaulted presbytery with lunettes; the Chapel of Our Lady of the Rosary adjoins the church from the north. A tower bell from the 18th in the northwest corner. Remains of Early Gothic walls from the 13th c. with portals in the west façade disclosed in 1923. The vault with stuccowork decoration over the nave is from 18th c. Church furnishings are mostly Baroque (18th c.).

The main altarpiece from 1760 features a painting of Our Lady of the Rosary with St. Dominic (ca. 1760) covered by a painting of the Sacred Heart (a work by Adolf Hyła from 1963). Early Gothic portals from the 13th in the north wall of the presbytery. Carved backrests of mannerist stalls from the years 1620-30 with the scenes from the life of St. Dominic and St. Hyacinth.

Baroque pulpit from the years 1714-16 and Renaissance sandstone baptismal font from the early 16th c (partly damaged) in the nave. Six Baroque altarpieces from around 1760 in the four-bayed nave. Organ loft on the west with organ pipes from 1925.

Adjoining on the north is the Chapel of Our Lady of the Rosary from the 15th c., most probably built on the site of St. Gotthard' Church, which has been a place for worship for centuries. The present appearance is from the years 1900-01. Stellar vaulting in the nave and the presbytery. Three plates by the entrance: two Late Renaissance sandstone plates from the 17th c. and a Gothic sepulchral plate from the Vischer's workshop in Munich. A Neo-Gothic pulpit on the side wall and a Neo-Gothic high altar with a bas-relief from 1901 depicting Our Lady of the Rosary with St. Dominic and St. Catherine of Siena in the presbytery. The bas-relief is covered by a miracle-working Late Baroque image of Our Lady with the Infant from 1631 adorned with a silver dress in 1648 and crowned in 1968.

Only two wings remain of the monastery buildings from the 14th c. (rebuilt in the 17th c.); they features stellar vaulted Gothic galleries. Remains of the wings dismantled in the 19th c. (in ul. Garbary) were disclosed in the years 1970-71.

ADD TO TRIP
Church of the Most Sacred Heart of Jesus and Our Lady of Consolation (Jesuits)
ul. Szewska 18
Poznań