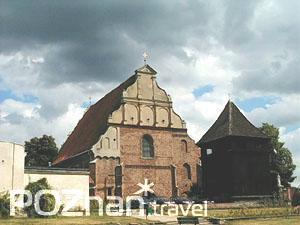 According to tradition, the church was built in the 13th on the site where St. Adalbert delivered the word of God. The present structure is from the 15th c., extended in the 16th and 17th c. When the tower was lowered in the 18th c., the bells were moved to the wooden campanile. Apart from the Church of Virgin Mary of Sorrows in Łazarz, it was the only church in Poznań the Poles had access to during the war. Damaged in the battle of Poznań in 1945, it was rebuilt after the war.

A Gothic church with a nave and two aisles and stellar vaulting. It boasts art nouveau polychrome decoration by Antoni Procajłowicz from the years 1911-13. The main altar made by Antoni Szulc in 1953 is modelled upon a medieval triptych; a Late Gothic bas-relief depicting the Assumption from the first half of the 16th c. in the central panel. Three side altars, two altars in the left aisle feature interesting paintings: Guardian Angels (Krzysztof Boguszewski, 1631) and The Lamentation over the Dead Christ (2nd half of the 16th c.). Two works by Marcin Rożek: the marble sarcophagus of Karol Marcinkowski from 1927 and the pulpit from 1925, made from artificial stone and decorated with busts of eminent Polish preachers. An imposing grille from the 17th c. and an altar with paintings showing St. Anthony and St. Anne with the Virgin Mary and the Infant Jesus composed of 17th-century and 18th-century elements. Adorning the walls are the epitaphs of meritorious Wielkopolskans: Józef Wybicki, Andrzej Niegolewski, Michał Sokolnicki, Antoni Amilkar Kosiński, Wacław Gieburowski and Wojciech Turski (parish priest in the 16th c.). A plague commemorating Hipolit Cegielski from 1946 in the narthex at the end of the right aisle.

The church boasts a nativity scene with 102 moveable figures, among others Polish rulers and national heroes, that can be seen at Christmas time.

Numerous plaques on the walls of the church and on the surrounding wall commemorating eminent Wielkopolskans (among others Klaudyna Potocka and Emilia Sczaniecka).