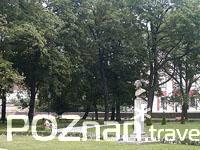 Situated near Podgórna Street, behind the old Jesuit College and the church of St Stanislaus the Bishop, this large garden was created by the Jesuit College back in the early 18th century for the purposes of production and education.

From the memoirs of Józef Kalasanty Jakubowski (1788-1877), biology teacher at St Mary Magdalene Secondary School, we know that the garden performed the function of a botanical garden. The teacher mentions that it was useful "in lecturing about biology". In 1815 the garden became part of the residence of Antoni Radziwiłł's deputy, who later transformed it into a park. With the expansion of the city, for example when the east section of Podgórna Street was made, the park was considerably reduced in size. In 1938 it was opened to the public and received its today's name. At present the park covers some 1.8 ha. There are some noteworthy trees growing here, such as the linden tree whose trunk diameter is 3 meters, the sycamore, the oak, the plane tree. Among the greenery stands the marble bust of Frederic Chopin sculpted by Marcin Różek. In 1923 it was moved to Moniuszki Park, where it was luckily spared the destruction of war. It returned in 1961.
Opening hours: