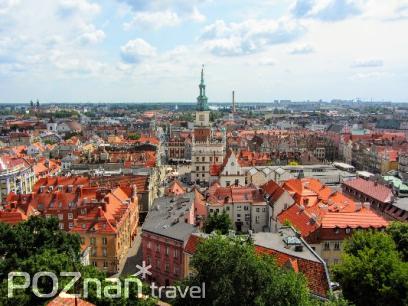 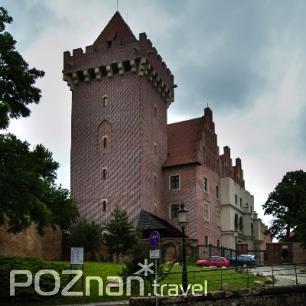 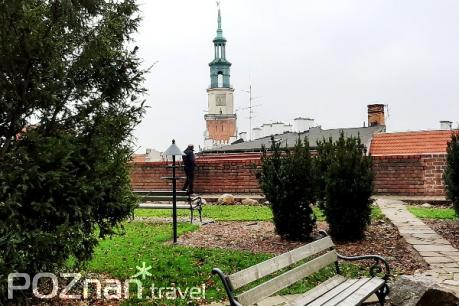 Przemysł I built his ducal residence in the second half of the 13th century atop a hill that rises some metres above the level of the Old Market square. His son, Przemysł II, the later king of Poland, extended the castle with the intention of converting it into a royal seat.

Despite the king's tragic death in 1296, the construction was not interrupted and the castle was most certainly completed in the reign of Kazimierz the Great. It was the largest secular edifice in the country. Apart from the residential tower it consisted of a 63m long, 17.5m wide and at least 9m high building and a defensive tower.

Through the ages the castle suffered damage on a number of occasions and was extensively rebuilt. The Gothic edifice was destroyed in a fire in 1536. Governor Andrzej Górka rebuilt it in the Renaissance style but the Deluge and the Great Northern War again wrought destruction to the city. Though partly restored in 1721, the castle slowly fell into disrepair. In 1783 Kazimierz Raczyński, the last governor of Wielkopolska, had a building erected atop Przemysł Hill that housed the archives. It was designed by Antoni Höhne who utilised parts of the old castle foundations and south walls. Some annexes were added to the building at a later date. After the second partition of Poland it housed the office of Prussian notaries, the appellate court and the State Archives (since 1885). The building structure on Przemysł Hill was largely destroyed in 1945. During the restoration work carried out in the years 1959-64, only Raczyński's edifice regained its former splendour.

Since the times of Władysław the Elbow-high, the castle, being the seat of Wielkopolskan governors, also functioned as the residence of Polish kings and saw visits by many a crowned head, among others Kazimierz the Great, Władysław Jagiełło and Kazimierz IV Jagiellon. John I Albert spent over a year in the castle where he accepted the homage of Hans von Tieffen, the Grand Master of the Teutonic Order. Some foreign sovereigns also visited the castle, among others John I of Bohemia and Eric I, king of Denmark, Sweden and Norway. Several royal weddings were held here as well: Kazimierz the Great married Adelheid of Hesse in 1341, his daughter Elżbieta wedded Bogusław V, duke of Szczecin, in 1343 and Maria, Władysław Jagiełło's niece, married Bogusław X, duke of Słupsk, in 1433. In 1513 during Sigismund the Old's stay in the castle, his wife Barbara Zapolya gave birth to Jadwiga.

Przecław Słota, the burgrave of the castle in the years 1398-1400, is the author of the poem Wiersz o chlebowym stole (also known under the name Wiersz o zachowaniu się przy stole ), the oldest secular poem written in the Polish language.