The area of the Cathedral Island, surrounded by flood waters of the Warta River and its arm the Cybina, was an easily defended place that was settled for the first time as early as the ninth century. The settlement grew rapidly, becoming one of the major centres of power of the Piast Dynasty, the first Polish rulers, and in the mid-tenth century at the initiative of Duke Mieszko I the settlement was surrounded by massive ramparts. Its further development was linked with the Christianisation that took place in 966 - the settlement soon included a ducal palace with a chapel of the Blessed Virgin Mary, and two years later, the first bishopric in the Polish territory, which necessitated construction of the first cathedral.

In 1038, the settlement was destroyed during the invasion of the Czech Duke Břetislav. Rebuilt, the settlement has never regained its rank of the capital city, the privilege that having been conferred on Krakow; Poznań served later as a seat for the Dukes of Greater Poland (Wielkopolska). In the mid-thirteenth century, when Duke Przemysł decided to found a town on the left bank of the Warta, Cathedral Island passed into the hands of Poznań Bishops. The historic layout of Cathedral Island has survived largely unchanged until 1960s, when it was crossed by a new transport route - today's Prymas Stefan Wyszyński Street. 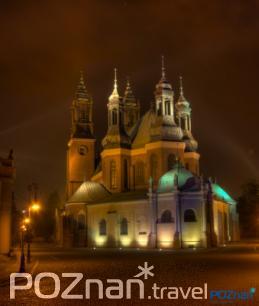 The most important building is the Archcathedral Basilica of St. Peter and St. Paul. The rank of the cathedral is evidenced by the fact that the figures buried in it include three kings and five dukes of the oldest Polish Piast dynasty, including Mieszko I and Bolesław Chrobry. Originally built in 968 years, the cathedral was repeatedly damaged by natural disasters and wars, which had an impact on its architectural form. After the World War II, cathedral's Gothic form was restored, yet the interior still bears the signs of the Renaissance. What deserves particular attention inside the Cathedral is its Golden Chapel - the mausoleum of Mieszko I and Bolesław Chrobry, the Gothic-style main altar and bronze tombstones from the fourteenth and fifteenth centuries, some of which originate from the Nuremberg Vichner workshops. The basement features the oldest parts of the cathedral from the pre-Romanesque and Romanesque times: fragments of walls, a baptismal bowl and tombs of the first rulers. 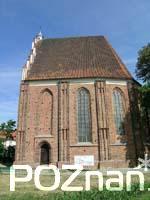 The immediate vicinity of the cathedral includes a Gothic church of the Blessed Virgin Mary, built in the fifteenth century on the site of a former ducal residence. The east wall of the church has a stone with specific grooves, which, as the legend has it, the Polish army had touched with swords before embarking on a battle as a sign that they wished to fight under protection of the Mother of God. This stone is sometimes referred to as "the devil stone' - as it is said that the devil, wishing to pull out church's foundations from the earth, tugged at the stone forcefully, leaving deep grooves in it. 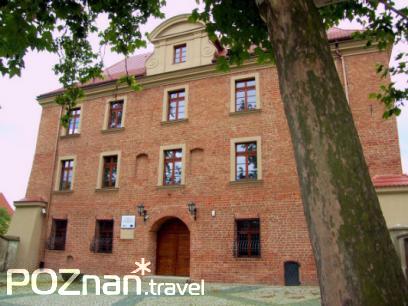 From the square at the cathedral follow Lubrański Street, which runs northwards. On the right-hand side you can see an imposing brick building - the former Lubrański Academy, which was the first Polish school teaching in the spirit of Renaissance humanism and the first Poznań's school with the nature of a higher education school, founded in the sixteenth century by Bishop Jan Lubrański. Today, the building houses the Archdiocesan Museum with permanent exhibition primarily including religious exhibits from churches around Wielkopolska. The most interesting exhibit is the so-called St. Peter's Sword. As the legend has it, it was precisely with this sword that the apostle cut off an ear of a high priest's servant in the Garden of Gethsemane when the Christ was arrested. The sword was brought here by Bishop Jordan.

In front of the museum stands a statue of Jan Kochanowski erected in 1884 to commemorate the 300th anniversary of the poet's death. Due to the fact that the then Prussian authorities did not permit the erection of the statue for the Polish poet, the monument was erected to Jan Kochanowski as a Provost for the Poznań cathedral chapter, a post he held between 1564 and 1974, although he had probably never been to Poznań.

Turn right and enter Ignacy Posadzy Street, which will lead you to the Bridgehead of the Cathedral Island Sluice, an example of Prussian nineteenth-century fortifications. From there, go right to see the cathedral again, from which head to the left and enter the District of Śródka via the Bishop Jordan Bridge built in 2007.

The District of Śródka was originally a ducal settlement. The name derives from the day of the week, 'Wednesday,' when the district held a weekly market. As of the thirteenth century, Śródka has had its own local government, and since the fifteenth century, civic rights. In 1800, just like the Cathedral Island itself, it was incorporated into Poznań.

One arrives at Śródka's Market Square (the centre of the quarter) by following Ostrówek Street, which was once a separate town and was known as the smallest town in the Crown of the Kingdom of Poland. Much of the market was destroyed during the war, and then again in the 1960s and 70s, due to the marking-out of the Chwaliszewska Route and Podwale Street. The remaining part of the market square includes the sixteenth-century Gothic Church of St. Margaret the Virgin and the eighteenth-century Philippians' Monastery. 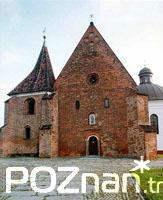 There are two names associated with the monastery: 'Commandery' (the land of former settlement that was handed over to the monastery) and 'Malta' (the area of land granted to Joannites as endowment to allow them to fund the hospice). The commandery is an administrative district of the monastery. It boasts the longest history in Poland and has survived until 1832. The term 'Malta' derives from the fact that in its turbulent history, in the sixteenth century the convent found its seat on the Malta island, and that is why it was also frequently dubbed as 'Maltan Convent'.From the Śródka Market head towards the Śródka Roundabout and, via an underground passage, enter the Church of John of Jerusalem beyond the Walls. It is one of the oldest brick buildings in Poland, built at the turn of the twelfth and thirteenth centuries. The first church to have been erected in this place was founded by Mieszko III the Old, who handed the church, along with a hospice and the lands, over to the Knightly Order of Joannites, committed to helping travellers. The term "beyond the walls" refers to the location outside the mediaeval town fortifications.