When visiting a new place you are always faced with a dilemma - what is worth seeing, where is it worth going. Poznań is an extraordinary city - open and dynamic, filled with unique places and attractions. Here are a few tips which will allow you to enjoy your stay to the fullest - the 10 Must-Do Things in Poznań.

1. See the billy goats at noon.

In the very heart of the Old Market Square you will find the most beautiful Renaissance Town Hall north of the Alps. In 1551, a clock with mechanical billy goats has been installed in the Town Hall. Every day, as the clock strikes noon, on the tower above the clock a door opens, and two billy goats appear. Controlled by the clock’s mechanism, they butt their horned heads 12 times.

Good tip for the late-comers - if you didn’t manage to get to the Rynek before 12pm, there is a vintage billy goat mechanism on display inside the Town Hall.

There is a legend connected to the installing of the billy goats. After the clock was finished, it was supposed to be showcased to all the councilmen and the governor of Poznań. A feast had been prepared for this occasion, but due to the  clumsiness of one of the cooks, the haunch of venison which was to be served, was completely burned. To save face, the cook stole two billy goats, which he intended to roast and serve, but they escaped to the Town Hall tower. When the esteemed guests arrived, they saw the two billy goats butting heads on the ledge of the tower. It was then that the governor commanded mechanical billy goats to be attached to clock’s mechanism.

A St Martin’s Croissant is made with semi-puff pastry and white poppy-seed. Today it has become one of the most famous Polish pastries, protected by the European Union Certificate of Authenticity, which only allows for its production here in Wielkopolska, under strict instructions. The tradition of baking St Martin’s Croissants goes back to the 19th century and is tightly connected with the November 11th church fair at St Martin’s parish. One of Poznań’s pastry makers, in response to the call of the parish priest, asking for donations for the poor, made as many as three trays of croissants and brought them to the church. Other pastry makers soon followed his lead. And so, the tradition of eating St Martin’s Croissants was created, and it has been continued on until the present day.

Only on St Martin’s day (November 11th), Poznań natives and the many tourists eat around 250 tonnes of croissants - that is about 1.25 million individual pastries!

In the Poznań Croissant Museum and Experience you can see the original shows which reveal the secrets of Saint Martin Croissants and other Poznan’s prides. Let’s meet in a beautiful, renaissance tenement house right opposite the Town Hall. The shows are presented live by the locals and prices include croissant tasting!

Along the northern shore of Malta Lake runs the 3.8km route of the kids’ favorite small-gauge train “Maltanka”, which takes her passengers all the way to the New Zoo. The train operates daily from the end of April till the end of September.

On some weekends, the train is drawn by the antique steam engine Borsig (affectionately called “Agusia”) from 1925. For the locomotive to lead the first train at 10.00, it has to be started at 02:30am.

The MPK (Urban Transport Company), whose care “Maltanka” is in, also organizes rides with vintage trams and buses. The buses are equipped with sound systems and they operate on Saturdays, Sundays and holidays starting from the end of April till the end of September. Further information can be found at www.poznan.travel.

The Old Brewery 50 50 is a commerce and arts center, created in a former 19th century brewery. Apart from many shops, there are also beer gardens, clubs, a park, an arts center and a hotel. In 2005, the Old Brewery 50 50 received the International Council of Shopping Centers Award in the best medium-sized shopping center in the world category.

Everyone willing to get to know the Old Brewery 50 50, its history, the scope of its activities, the idea whose representation it is as well as its unique architecture and permanent art collection can visit the information points in the Old Brewery 50 50 and arrange for a convenient time for a guided tour. It is also worth asking for a map of the facilities which are in the building - listing unusual gems like a Persian carpet, or the list of art installations.

The guided tours need to be arranged with two weeks’ notice. For more information, visit:

5. Walk the halls of the former Imperial Castle.

The former Imperial Castle is the last and youngest monarchical residence in Europe, created at the beginning of the 20th century for German Emperor Wilhelm II. After WW1, the Zamek (Castle) housed among others the Mathematical Department of the Poznań Univeristy, whose alumni broke the code of the German ciphering 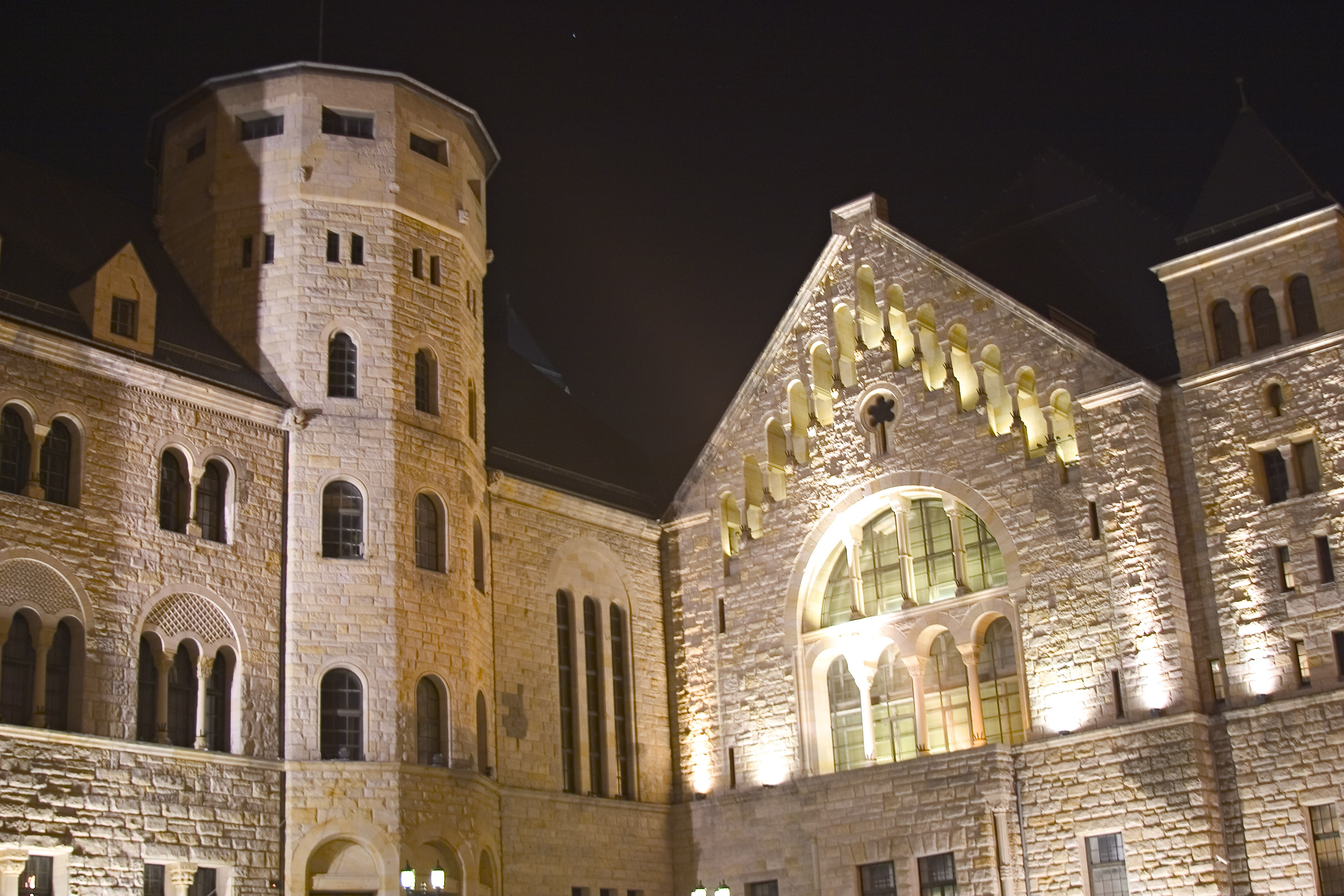 machine - Enigma. During WW2 the castle was completelly remodelled and made into the official quarters of Adolf Hitler. Today, Zamek is a cultural facility, with many exhibitions, a cinema and a children’s animation theater.

It can be visited with a guide (assembly in the Great Hall), which allows to see many interesting nooks and crannies of the castle, unavailable on any other occasion, such as the original 5-ton throne of Wilhelm II.

In the National Museum there is a collection of Roman imperial portraits, extraordinary and rare among Polish collections. On the ground floor museum presents a unique collection of coffin portraits. On the first floor there is the collection of Western-European art - Netherlands’, Flemish and Dutch paintings, Italian, German from the first part of the 19th century, as well as the only in Poland collection of Spanish paintings (Zurbaran, Ribera and Velazquez).

It is there that you can see Poland’s only Claude Monet - “La plage à Pourville, soleil couchant” (“Beach in Pourville”) - returned to the Museum in 2010 after being stolen ten years prior.

Due to the sensational thread and the daring theft of the painting, a film about the event is currently in the making.

In the underground of Poznań’s cathedral church you can see the relics of the first Polish cathedral from the 10th century, the tombs of Poland’s first rulers - Mieszko I and Bolesław the Brave as well as a supposed baptistery from 966. Next to the cathedral, a state-of-the-art interactive Heritage Center of Cathedral Island "Brama Poznania" was built.

The former cathedral island of the Cathedral Island is one of the most charming parts of Poznań. With the cathedral overlooking the whole area, a small Church of Saint Mary the Virgin in Summo, cobblestone streets leading up to former ramparts and historic garden homesteads of cathedral canons is an enclave of peace and quiet, and somehow time seems to slow down here.

Other places worth visiting in the Cathedral Island are the Archdiocesan Museum, home of St. Peter’s sword, located in the former Lubrański Academy and the Genius Loci Archeological Reserve.

In Poznań, a new kind of urban game has been created - a tourist urban game, designed to be played independently, on your own. The p 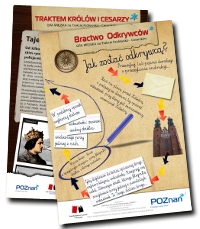 layers download a start card from the Internet (www.gryturystyczne.pl) or collect it at one of tourist information points and play the game in their own time and at their own pace. Although there is no actual entertainers organizing the game, it is designed in a way that the city itself, and its own urban space is the organizer of the fun.

Today, there are 27 available urban games (9 in English), showing Poznań and its surrounding areas from various perspectives. One of the games is dedicated to the oldest part of Poznań  - Ostrów Tumski, another to Poznań Uprising, yet another to places connected to kings and emperors who visited Poznań over the ages. The gameplays have been developed in a way which allows them to be played over a span of a few hours, and be interesting and understandable also for people who don’t really know Poznań’s history.

Inscriptions, hidden sculptures, architectural details together with the content of the card are hints for the players to follow, leading to an exciting finale. Game players can feel like characters of “The Da Vinci Code”.

9. Have a stroll around the Citadel park.

The Poznań’s largest urban Citadel park is around 100 hectares and is located in the center of the city, on the remains of a former Prussian fortress. Until the 19th century it was a hill with a picturesquely located village of Winiary (the name referring to vine cultivation), and afterwards it had been transformed into a massive fort. After WW2 it became an urban park. Many alleys and charming nooks invite the stollers, and the lovers of rollerblading or biking find it a dream location for active leisure. A huge meadow in the middle of the park is a place of various events and music concerts. Citadel’s number of restaurants and cafes offer tasty refreshments and a comfy rest.

Located on the Citadel grounds is the Museum of Arms (in the former Military Laboratory) and the "Poznań" Army Museum (in the underground of the former Small Water Gate), displaying a variety of Polish, German and Russian military equipment.

Many art installments have found their home at the Citadel, including Magdalena Abakanowicz’s largest outdoor installment, “The Unrecognized Ones”.

The stadium was the arena of UEFA EURO 2012™ football championship. It can hold up to 43 thousand sports fans. It is a place of exciting sporting events, great concerts, shows, meetings and other spectacular events.

Stadion POZNAŃ is famous for its grand atmosphere. Fascinated by the Poznań football fans, Manchester City followers still celebrate the scoring of a goal by turning around and singing “Let’s All Do the Poznan”. The popularity of this unique way of cheering your team has surpassed the British Isles and spread to other clubs and national games. Lech Poznań play their matches in Poznań from February till December. The current game schedule and online ticket purchase are available at: www.bilety.lechpoznan.pl

The stadium is open to visiting Mon-Sun. For more information, go to www.stadionpoznan.pl.

12 Sports Bar & Restaurant is available at the stadium for refreshments and beverages.

The Official Lech Poznań Store is worth checking out - it is located at Tribune IV, with a wide range of Lech Poznań club souvenirs.