A Triathlon full of victorious energy

The ENEA Poznań Triathlon 2014 is an unprecedented event in Poznań. The Polish Long Distance Championships, a record-breaking attendance of participants and supporters, and a strong crew with Chris McCormack, the multiple world champion – these are only a few of the many attributes asserting the uniqueness of this event. Add the numerous fringe events accompanying the main show and you can be sure that the triathlon weekend (26-27 July) will definitely make its mark in the history of Poznań.

Over 2500 competitors (including both short and long distance) will take part in the largest event of the nationwide cycle of 7 triathlon events: the ENEA Poznań Triathlon. That the Poznań competition has gained huge popularity in the world of triathlon is best demonstrated by the fact that the start line will see representatives of no less than 23 countries, including France, Spain, Ukraine, Australia, Japan, USA and Luxembourg.

Fighting for the championship title 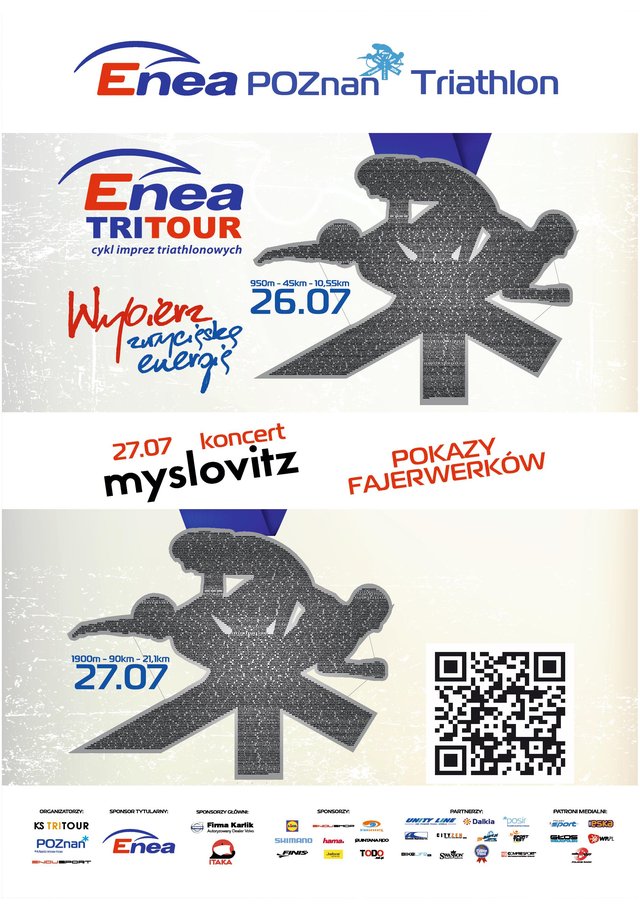 The success of  last year's triathlon in Poznań had a positive impact on the decision of the Polish Triathlon Union to stage this year's Polish Long Distance Championships right in the capital city of Wielkopolska. Thus, for many professional competitors, the ENEA Poznań Triathlon is a target event, for which they prepare for the whole season. At the start line we will see the cream of Polish triathlon, including: Filip Przymusiński, the current leader of the ENEA Tri Tour and multiple medal-winner in Polish Championships, or Kacper Adam, demonstrating his good shape  this season (he has already won twice in  ENEA Tri Tour competitions –  in the long distance at the JBL Triathlon Sieraków and in the short distance at the Unity Line Triathlon Szczecin). It will not only be Poles  competing for the top places, however. Talented Ukrainian triathletes, with Dorosh Nazar at the forefront, are worth mentioning too.

The hottest favourite for the long distance and the star of the ENEA Poznań Triathlon will be Chris McCormack. His most important achievements include two world championship titles (in IRONMAN®-licensed competitions) and the world championship at the Olympic distance. “We can definitely say that Chris McCormack is a living legend of world triathlon. The list of his successes is very long. I am glad that a competitor of this class will visit Poland and take part in the ENEA Poznań Triathlon,” Wojciech Kruczyński, President of Endu Sport and co-organiser of the ENEA Poznań Triathlon says. "I hope that in a year ‘Macca’ will come back to the capital city of Wielkopolska with other triathletes, constituting the top of the triathlon world.”

Amateurs at the start

Despite the participation of prize-winning competitors in the triathlon, the biggest and the most important group of competitors will be the amateurs of this discipline. Let us name one of them: Ryszard Grobelny, the Mayor of the City of Poznań, who will start the long distance. Renowned personalities will also join the short distance group; including Maciej Dowbor, who will compete for a high position in the ENEA Tri Tour cycle. Regular participants in huge sports events, Team Biegiemnapomoc.pl (“Running for help”), will appear too. Participation in the competition has been announced by: Tomasz Karolak – the actor, Iwona Guzowska – the multiple world European champion in kick-boxing and boxing, Robert Rozmus – the actor and  Piotr Nowak - tha actor and director. The initiative “Running for help” aims to disseminate  knowledge on autism. The ambassadors of the campaign will include the paratriathletes, Marcin Suwart and Jarosław Skiba, for whom  participation in the Poznań event is a part of preparations for the Paralympic Games in Rio de Janeiro.

The first attraction is to take place on 25th July. A day before the official start of the ENEA Poznań Triathlon, we will see ENEA TRI KIDS 2014, a mini-triathlon for youngsters . The young competitors will start in three age categories, each of which will be presented with a different distance to cover. 25 m of swimming, 1000 m of cycling and 400 m of running is planned for the youngest group (7-8 years of age). Another two age groups (9-10 and 11-12) will have 50 m to swim, and a twice as long and a three times as long bicycle route respectively. And the running distance will be increased by 200 m respectively. Each contestant will obtain a commemorative medal and small gifts from ENEA.

Just as the adrenaline starts to drop after the sports sensations, a concert of Myslovitz is planned to complete the ENEA Poznań Triathlon 2014. Their music will allow everybody to stay in high gear until the end of the event. If anybody is still hungry for emotions – there will be a stunning fireworks display after the concert.